Shuck It, Don’t Chuck It

Oysters are a familiar sight in the Lowcountry, both on dinner plates and in area waters. But without careful conservation, that won’t always be the case. A local environmental program is hoping to replenish these important natural filters even as local diners slurp more and more of them out of their shells.

Oysters provide a habitat for species including fish, shrimp, crabs, clams, snails and worms, creating the base of the salt march food web. Oyster larvae must attach to a hard surface — ideally another oyster — to develop.  Female oysters releases millions of eggs in the fall, which are fertilized by sperm dispersed in salt water by male oysters. But area diners’ voracious appetite for oysters is having a big impact on oyster populations: We’re eating them faster than they can replenish themselves.

The Outside Foundation is working with the Coastal Discovery Museum and local restaurants to reverse that trend. Thanks to their efforts, when oysters are served up at area restaurants, the shells are recycled back into the water to help new oysters grow. “It was a phone call to Al Stokes at the Waddell Mariculture Center that planted the seed for this project,” Fruh said.

In 2017, Fruh received a grant from the Patagonia Foundation to start an oyster shell recycling program on Hilton Head Island. Previously, the closest recycling site was Trask Landing in Bluffton.

The $9,000 grant covered recycling pickups at local restaurants, printing costs for educational materials and signage, and administration costs. When the grant ran out in July, many of the restaurants decided to continue recycling the shells, paying for it themselves. Weekly pickup is $25, so the restaurants pay $100 a month. The men, women and teenagers who bus tables at Hilton Head seafood restaurants are on the front lines of this conservation effort. They scrape the shells from diners’ plates into special collection buckets that get emptied into 35-gallon bins on wheels. Locally owned commercial recycling company i2 Recycle picks up the bins on Tuesday mornings using a special trailer, then dumps them at the Coastal Discovery Museum’s 68-acre Honey Horn property where they are sanitized by the sun in piles just past the front gate. Coastal Discovery Museum president and CEO Rex Garniewicz said the recycling program is educational because many people don't understand the importance of returning oyster shells to the environment.

“There are so many benefits to this recycling; it helps reduce waste in our landfills, it helps new oysters grow, and they in turn help clean our oceans,” he said.

Local and non-local shells are recycled together according to South Carolina Department of Natural Resources guidelines.

“It’s a three- to six-month quarantine, while mother nature eats away all the fleshy bits,” Fruh said.

SCDNR picks up the bags of shells as needed and submerges them at locations in local waterways.

Because only about 15 percent of oyster shells consumed in South Carolina are recycled, SCDNR — funded by taxpayers — currently must purchase oyster shells from other states to replenish the beds harvested each year.

In addition to recycling shells, Coligny Plaza-based FISH Casual Coastal Seafood restaurant donated $1,800 to The Outside Foundation. J.R. Richardson, owner of FISH, said the restaurant’s menu has always revolved around “the delicious seafood provided by local waterways, and we’re doing what we can to help keep those waterways healthy.” “We prevented that enormous amount of shell from going to the landfill, as it had in previous years,” Fruh said.

Abby Wirth of Coastal Restaurants and Bars Group said the company was proud to be involved in this positive community effort. And individuals can also get involved in recycling oyster shells. “If it’s a shell (oyster, clam and mussels), it can be recycled. Simply place your shucked shell in a bucket and bring the bucket to Honey Horn,” Fruh said. “The oyster shell drop-off site is just inside the main gate on the left side in the open field. And bagging volunteers ages 12 and older are welcome!”

For more information on the program, go to www.outsidefoundation.org. 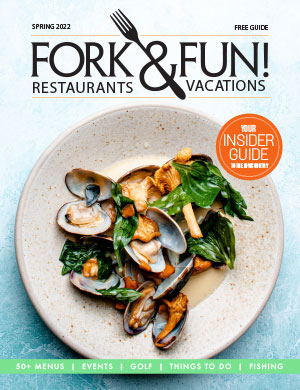