LET YOUR AWARD-WINNING PATHWAYS GIVE YOU A NEW WAY TO RIDE. 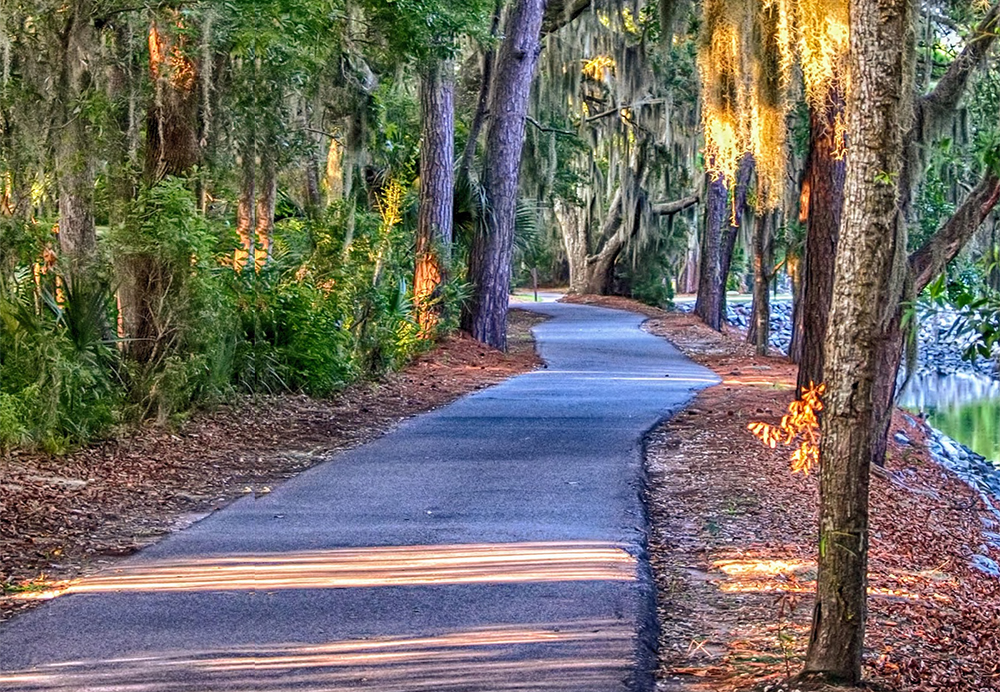 Bluffton began as a nat ive american enclave where tribes would fish and collect oysters, trading them along the May River. Later, it became a retreat for wealthy cotton, indigo and rice plantation owners who enjoyed the river breezes from the town’s bluff. Hence its name, Bluffton. That life revolving around gentle breezes continues today, earning the town the designation of “one of the last true Southern coastal villages.”

There are few things more rewarding then saddling up on your bike, pointing your tire down a new pathway, and letting exploration unfold all around you. And there are few better places to enjoy a blissful bike ride than Hilton Head Island.

It’s not just in the gentle climate or the pathways that wind in and out of dense forests, beach parks and tranquil lagoon areas, it’s in the dedication that Hilton Head Island has demonstrated in creating the ultimate cycling experience.

Just look at the numbers when it comes to our pathways: We enjoy 6 miles of bike lanes, 117 miles of shared-use pathways, 108 miles of paved shared-use paths. 14 miles of planned pathways and one mile of single track. All told, 24 percent of our arterial streets have bike lanes or paved shoulders. And the community has embraced the role these pathways play, with the Town of Hilton Head Island offering a help line so riders can report unsafe conditions and the Hilton Head Island Rotary Club dotting them with signage highlighting interesting facts about the community.

And the places these paths can take you simply dazzle. While the many private communities around the the island are closed to public cycling, the arteries of our path system lead to many of our island’s most dazzling spaces.

When riding on the north end, be sure to cycle over to Historic Mitchelville Freedom Park on Beach City Road, where you can pedal right up to a stunning observation boardwalk and bask in views of Port Royal Sound in a place whose history stretches back thousands of years. There is another observation deck not far off, at Mitchelville Road’s Barker Field. Here you can enjoy a panorama of water views where the Sound meets the Atlantic.

Our bike paths can also guide you on a trip through time, as they stretch along some of our awe-inspiring historical treasures. At the corner of Matthews and 278, you can park your bike at the Zion Chapel of Ease Cemetery, where some of the island’s earliest families are interred. This spot has played a key role in the island’s history dating back to the War for Independence, and the Heritage Library has taken the utmost care in preserving this space and making it a fascinating spot to take in history. But to really turn back the hands of time, you can bike over to Greens Shell Community Park, right off of the bike path. Here, an elevated platform takes you out over an archaeological wonder: a four-foot tall, 30-foot wide shell ring enclosure dating back to 1335 A.D.

But Hilton Head Island’s pathways aren’t just for those seeing a relaxing pace as they tour the island’s sights and attractions. Serious cyclists are taking notice of the island’s pathways, as evidence by our role as host for the Southeast Biking Symposium and the popularity of our Pedal Hilton Head event. If you’re up for the challenge, you can retrace the Metric Century Route from Pedal Hilton Head, which takes you up and over our island’s three bridges. Think you can’t get a change in elevation in the Southeast? Try climbing up the Cross Island Bridge.

These pathways, and the community support behind them, are part of why our island was granted Gold Level Status by the League of American Bicyclists as a Bike Friendly Town. Our pathways run in and out of our many natural outdoor wonders, taking you from the bridges to the beach, crossing underneath 278 at Shelter Cove, and allowing full freedom of movement from point A to point B in a fun, eco-friendly way.

“We are the only Gold Level Bicycle Friendly Community in South Carolina and it has meant so much to us as a community, both in terms of a better lifestyle for islanders as well as a more enjoyable experience for visitors,” said Hilton Head Island Mayor David Bennett.

And the best part? Visitors don’t even need to worry about bringing their own bike. Some 20,000 bikes are rented each year from the multitude of bike shops all over the island. From beach cruisers to more serious cycles, you’re going to find your ideal ride for taking in our famed and award-winning pathways system